8 basic emotions – why so much?

What does emotion analysis give you that sentiment analysis does not offer? Why do we need as many as 8 emotions to describe every issue we have dealt with so far? And what do they actually mean?

What emotions does Sentimenti analyse?

The Sentimenti tools use the Plutchik model, which contains two positive emotions: joy and trust, two ambivalent: surprise and expectation, and 4 rather negative: sadness, fear, repulsion and anger. Each one means something concrete, involving action, praise or criticism, need or surprise. We will discuss them one by one.

By analyzing all basic emotions, we can fully assess, for example, how much the most popular fashion brands differ in the opinion of Internet users. We can also trace the changes of emotions while displaying such engaging series as Zniewolona or Czarnobyl.

Joy and sadness and sentiment analysis

These two emotions are most strongly associated with a simple division into positive and negative, i.e. analysis of sentiment. We will discuss them first and separately from the other six, but not because they are actually the same as sentiment. This would be a short-sighted simplification of the results of our tools and the Plutchik model.

Joy concerns all positive reactions, it is connected with a smile, with the feeling that we like something. Defined in this way, it is quite similar to “positive sentiment”, but not necessarily strong. In this last aspect it differs from the commonly understood joy, which is associated with a strongly positive reaction to something. In the results of our research, any praise increases the bars of joy, but also everyday courtesy.

Sadness means loss, a sense of loneliness. This emotion is opposite to the one described above, together with joy they form a contrasting pair in Plutchik’s circle. It means, among other things, that expressing both these emotions at the same time in a similar intensity (here we are already talking about the SentiTool results, i.e. the percentage division into individual emotions) proves a conflict, a very mixed attitude of the author of the text (or authors) to the subject. From the psychological perspective, from which the Plutchik model originates, it would mean a not very healthy or uncomfortable situation. The comparable intensity of positive and negative sentiment cannot be interpreted in this way.

The interpretation of joy and sadness may follow slightly different paths than that of sentiment, but to what extent are these measures different? In Sentimenti we use two models of text overtones, so we can measure it. In our research, we also count the relationships between different emotions and sentiment. A correlation (we use the r-Pearson measure here) greater than 0.6 is called strong, and close to 0.9 means that the two variables are basically the same. In the KNF analysis, this coefficient was 0.88 for joy and 0.47 for sadness. In the study on the mentions of Brand24 the correlations were the opposite: 0.37 and 0.58. We always talk here about the relationship between joy and positive sentiment and sadness and negative sentiment.

As you can see, depending on the subject, positive or negative sentiment can take almost entirely from a single emotion (as in the case of joy in KNF), but it can be the result of many different emotions being expressed by Internet users at once. The results concerning sadness and joy do not have to be directly related to those obtained in the analysis of sentiment – which also shows that it is the result of many different emotions being expressed in the texts at the same time.

As we have shown, joy and sadness are not just “little sentiment”. We’re talking about two different models, one binary and the other one with 8 categories. Let’s move on to the other 6 emotions. We will show that they do not necessarily equal positive or negative sentiment.

Trust is expressing a sense of security, expecting something to happen the way we expect it to. It involves a sense of community, a closer relationship, finding one’s place in the group. It can also be associated with a feeling of mutual similarity.

Repulsion is an expression of disgust, strong criticism and aversion. When expressing it, we indicate that something is outrageous, alien, immoral. It is a strong emotion connected with the reaction of rejection, avoiding something. Many offensive nicknames that describe socially unacceptable groups are associated with repulsion.

Anger – another strong feeling, very negative. Instead of avoidance, it is associated with attack, leads to aggression. In this way we express threats, but also dissatisfaction. It is accompanied by curses and shouting (in speech, in writing it can be expressed with stronger words).

Fear, as in life, is accompanied by danger, threat and risk. It is associated with escape, a desire to hide. It is also a cry for help.

Surprise comes when our predictions don’t come true or something unexpected just happens to us. When combined with joy, it gives admiration, and with sadness – disappointment. It can have very different intensity, from a slight surprise to (also associated with fear) panic.

Expectation – the last of the emotions we examined. The opposite of surprise because it means making predictions and believing that they will come true. It can therefore be associated with anxiety or excitement, so it is also ambivalent.

Depending on the subject, individual emotions may correlate with each other or with measures of sentiment. For example, in the KNF data, fear was moderately associated with negative sentiment (0.4), and anger was inversely proportionally associated with positive sentiment (-0.44). Interestingly, similarly inversely proportional (about -0.45) correlated trust and expectation with joy. This is a very intriguing result showing us that positive emotions, first, are not all related, and not necessarily the increase of one translates into the increase in the other.

Describing the overtones of a text, portal or brand awareness on the scales of 8 emotions gives us a lot of information. Sometimes only three emotions from the whole model may be the most important, but we will learn this only when we have an insight into the whole. 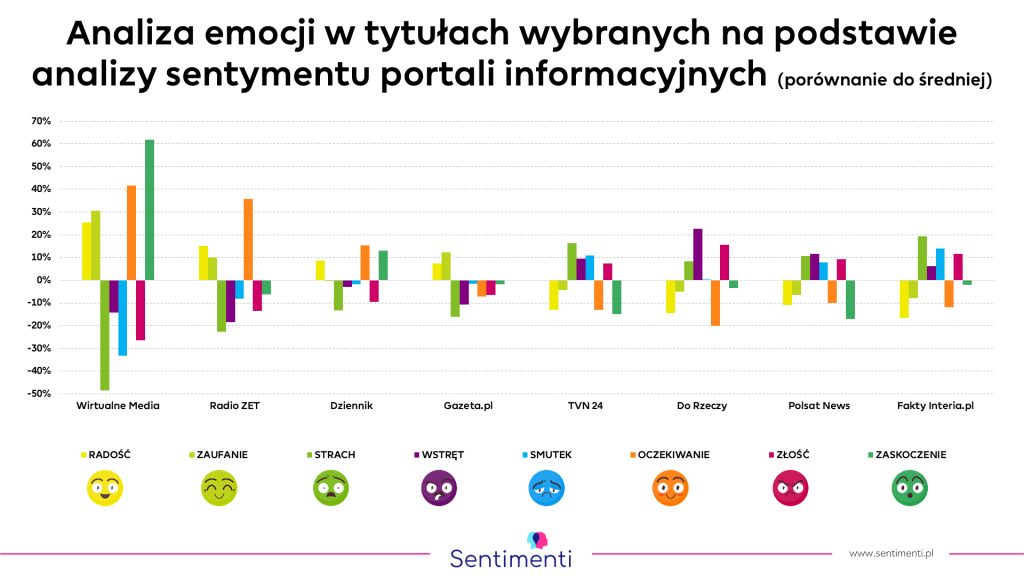 First of all, the analysis of sentiment is something different from the analysis of emotions, we are talking here about two helping models. Based on the results of one of them, it is possible to predict to some extent the results of the other – but only as a guide. Emotional analysis offers a much better insight into what exactly the texts under consideration communicate and what the consequences may be. For example, anger is a better catalyst for conflict or popularity loss than sadness. A decrease in trust, on the other hand, is more dangerous than a decrease in joy. The graph above shows how different emotions are placed on information portals depending on their character and target group.

Individual emotions are not only differently described by us, but also differ qualitatively in the reader’s perception of the text (we examined it on 22 thousand people) and in the intention of its author. More trust does not necessarily mean more joy – these are very different feelings and can sometimes turn out to be mutually exclusive. These are basic emotions, so they should be independent of each other. At the same time, they form a system and sometimes interact, even if one displaces the other.

If you want to know more about emotion analysis, we have also written about good practices to draw valuable knowledge from measuring emotions with Sentimenti tools. 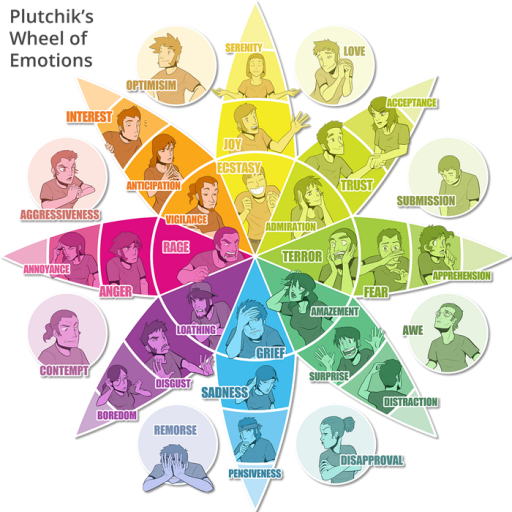