Communication with a client on Facebook. How do banks do it?

Are banks allowed to express emotions in their communication with their clients or is it in bad taste? It is customary to think that the best method of communication for offices and financial institutions is a matter-of-fact, dry and almost impassive tone. In public, however, they can brag about the participation of employees in marathons and charity actions, make an advertisement with Dawid Podsiadło in the lead role or offer services for juniors, all to warm up their image.

Banks also maintain accounts on Facebook, where they engage in direct communication with the client. In social media, there is no emotion or move, and at the same time, it is the easiest way to deal with an image crisis. A crisis, the costs of which can be borne by a given bank long after it is overcome. We decided to analyze emotions on bank profiles using our SentiTool tool. We will focus on the first quarter of 2019. As in the previous analyses, we will show the results concerning eight basic emotions from the Plutchik model. This time we will not mention the analysis of sentiment, because the analysis of emotions turned out to be interesting enough.

We conducted the SentiTool emotion analysis on the profiles of banks, which do not necessarily have many observers, but interact with this social medium. To identify the most interesting companies, we first examined the fan pages of many banks in terms of the relationship between the number of observers and the number of comments and likes left by them. The overall result is shown in the chart below. The number of observers and their total activity (comments, reactions, submissions) are shown on the x and y axes, and the size of “bubbles” corresponds to the activity of the bank itself (number of posts). The bank whose posts triggered the most reactions in the first quarter of 2019 was PKO Bank Polski. The next on this scale were: Eurobank (in our ranking, six banks have the least number of fans), BNP Paribas, mBank, Credit Agricole and finally Citi Handlowy (the least number of interactions with an average number of observers). The analysis of SentiTool’s emotions shown below concerns precisely these six most interesting cases. 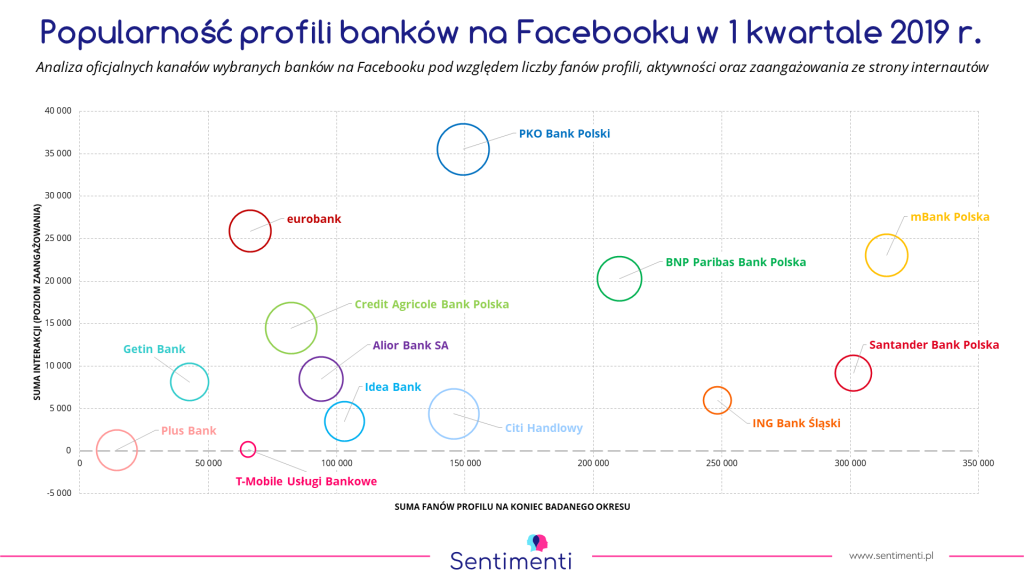 Let’s analyze banks’ Facebook communication in the first quarter of 2019. Six institutions selected by us published 58 posts on average in three months: most PKO (69), least Eurobank (46). This activity gained an average of 13 thousand likes and 2,406 comments in total, which means that clients were very committed to company fanpages. How often they reacted is not directly related to the attendance of posts published by the bank – Citi Handlowy published 66 posts, but it gained significantly fewer likes than other brands – less than 2 thousand. In turn, BNP Paribas was the least frequently commented bank: in total, it received only 694 comments under 52 posts.

Since the activity of facebook observers seems to be independent of how often banks communicate with them, perhaps the key is how they do it? In one of the previous posts we showed that the emotions contained in the text of the post can influence its popularity. Let’s see what emotions appear on bank fan pages. 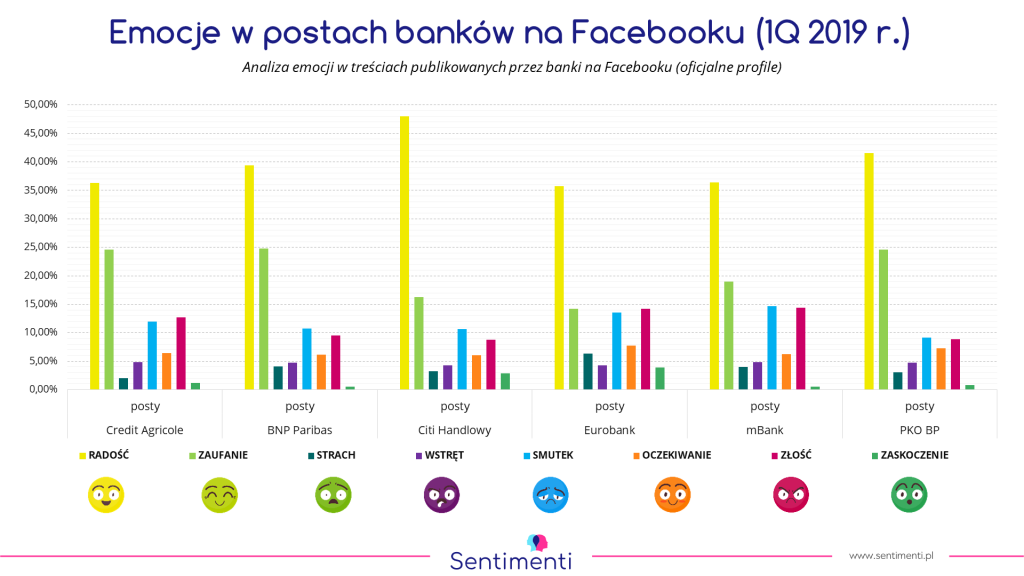 The posts of all banks seem very similar to each other. Citi Handlowy expresses the greatest joy in them – and this is the only difference that is immediately visible. However, if we take a closer look, we will also notice that surprise current appears only in Handlowy’s and Eurobank’s corporate messages.

The differences between the banks’ posts become more visible if we compare the results of the analysis of emotions of each of them with the average (drawn from the results of all six banks). Then we will see what percentage of the average of a given bank differs from the average. The change in the range of joys turns out to be insignificant now. This emotion is one of the most frequent appearances in most of the texts we examine and its intensity often turns out to be constant over various subjects, oscillating around 40%. For banks, surprise and fear are the most volatile, followed by anger and sadness. PKO appears as a bank using the most representative (i.e. closest to the average) style of communication when we talk about the emotions contained in the message. Perhaps thanks to this, it gains the most reaction from its fans? 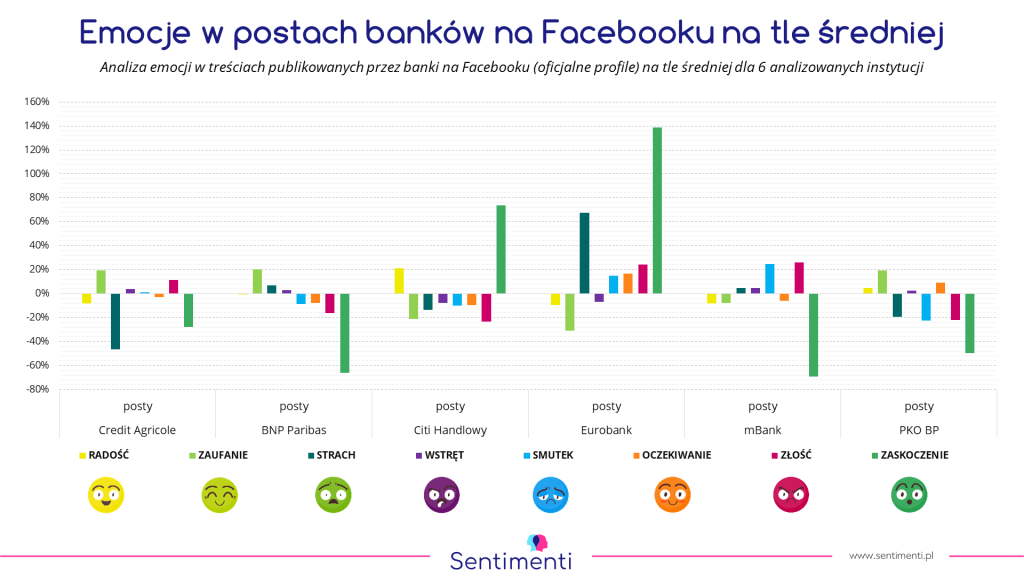 What about comments from bank customers? Here we expect to find more, and undoubtedly more varied, emotions. The chart below shows, like the previous one, a comparison of individual fan pages to the average. This time Eurobank and mBank are closest to the x-axis, i.e. the standard result. If we return to the first chart in this entry – these banks also determine the average intensity of interaction among the six institutions we are interested in – together with BNP Paribas, whose comments are already a bit more emotional. 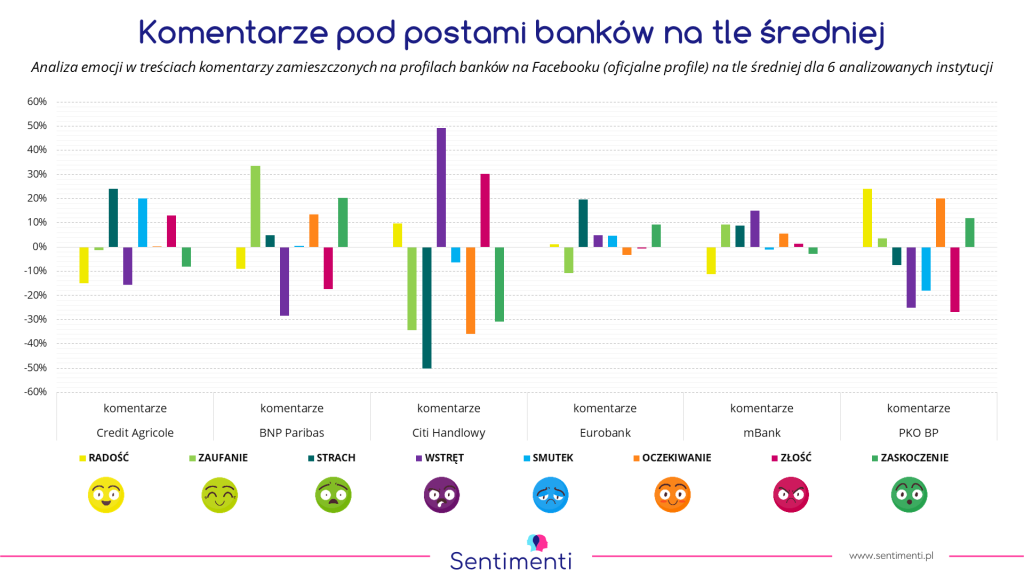 The most different emotions from the average results were expressed by the clients of Citi Handlowy; it is also the bank characterized by the smallest sum of interactions of the six we selected for analysis. There is something in the way this institution communicates or functions in social media that makes its Facebook observers prefer not to speak, and if they do, then to speak critically or with complaints and problems. In their comments from the first quarter of 2019, there are often voices criticizing unclear rules for introducing fee increases, repeated requests for specific applications, and complaints about bank software. On the other hand, the moderators seem to slight the answers to the problems or redirect questions to the stationary office. Commentators on Citi Handlowy’s profile also expressed less trust and expectations than in the case of other banks, and the overall tone of their talks is clearly unpleasant. Other banks evoke more positive reactions, including trust (BNP Paribas) and even joy (PKO).

During a face-to-face conversation, the participants gradually adjust to each other: their speaking pace approaches, their tone of voice and vocabulary become more similar, and finally the emotions expressed by the messages. We have shown earlier, on the example of the analysis of doctors’ self-descriptions, that the way of communication initiated by the specialist’s description influences what opinions his or her patients later write about the doctor. However, let’s check how customers’ comments on bank posts are handled. The chart below shows how the emotions in the former differ (or not) from those expressed by the institutions themselves in their posts. 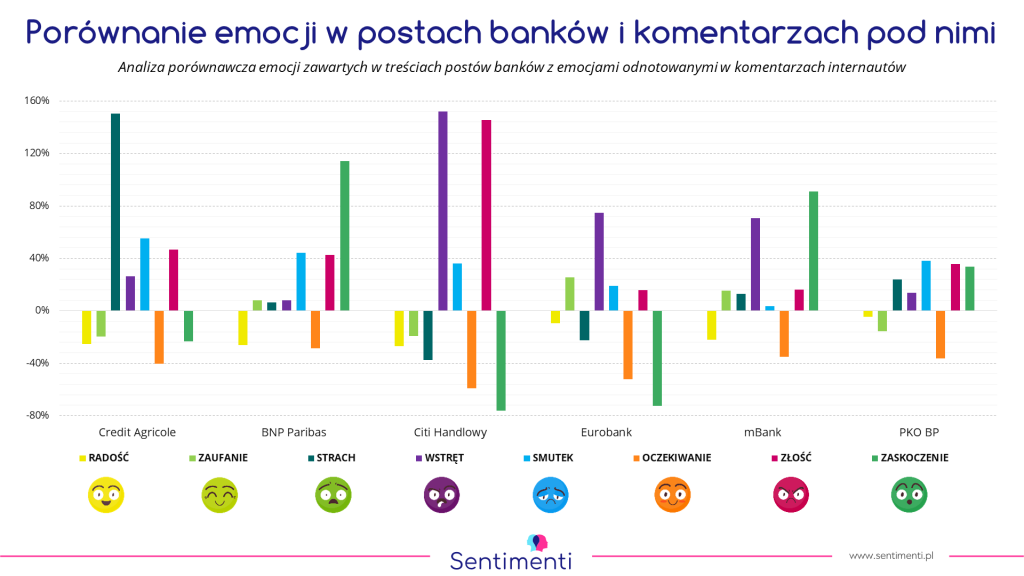 PKO is again closest to the x-axis – the communication of this bank expresses emotions, but in a moderate way and the same is done by its Facebook fans. Even when they tend to write more emotional statements (five out of eight basic emotions are expressed in a slightly more intense way than the bank). The tone of clients’ and the bank’s announcements is the most disparate for Citi Handlowy (with which observers, apart from complaints, are reluctant to interact) and Credit Agricole and BNP. On the fan pages of these two banks, many of the comments relate to innovative and somewhat controversial advertisements (e.g. with David Podsiadły or the slogan “why aren’t there women on banknotes?”).

The analysis of SentiTool’s emotions allowed us to examine both bank posts and their clients’ comments. Additionally, we juxtaposed results describing the emotional style of communication of these two groups, showing whose posts and comments are emotionally synchronized, and which banks are not synchronized with their clients, or in other words, where clients do not react by tuning to the tone of the bank. We can conduct a similar study on any profile, and thus diagnose to what extent the brand gets along with its followers. We can also indicate how the communication, emotions expressed by customers or the level of their involvement change over time. This is a great help in eliminating the effects of the so-called black PR and in everyday social listings.

The analysis presented above showed that although it is not easy to answer the question of what emotions a bank should express on its Facebook, we managed to diagnose where the success in communicating with a client on this platform comes from. Clients were most eager to communicate with PKO and Eurobank – and for these two institutions the emotional tone of the posts was the most similar to that of the comments, and simultaneously moderate. At the same time, PKO or mBank (also communicating efficiently with the observers of its fanpage) seem to represent bank standards in expressing emotions in social media, their results oscillate around the average. For Citi Handlowy and BNP Paribas, we managed to capture crises in communication with clients – both institutions lost observers in the first months of 2019, although from the emotional analysis point of view, Handlowy’s problems seem to be bigger. Such crises and difficulties in communication with clients on social networking sites must be prevented in time. You can imagine how much easier it is when we have data collected thanks to SentiTool from the study of emotions and specialist interpretation of the results of emotional analysis.

« Which words are positive and which are negative? Sentimenti talks about his research Recognition of emotions, valence and arousal in large-scale multi-domain text reviews »