Do emotions around the KNF influence the WIG-Banks index?

This time the article was prepared by Grzegorz Stefański, our financial advisor. He proposed to check whether the emotions expressed in the entries about KNF (Financial Supervision Authority) will allow to predict changes in bank indices.

In Brand24 tool we collected data from the period from 1 November to 17 December. As there was not much writing about the Supervision Authority before 13 November, we treated these 12 days as one starting point for data to which we compare further changes in sentiment and emotions expressed by Poles. As can be seen in the chart, before 13, about 200-400 mentions were written daily. On the day the scandal broke out, the number rose to over 20 800 and until today it did not fall below 700 (the least talk was about the KNF on December 5).

The banking sector on the Warsaw Stock Exchange has always been regarded as one of the more stable and relatively insensitive to sudden fluctuations. However, this stable sector is not immune to sudden turmoil, either. For nearly two months now we have been able to follow the events related to the so-called “KNF scandal”. It is clear that the situation in the KNF was very important for the banks’ listing on the WSE in the form of at least two stimulators.

The first one is media information about a conversation between the then President of the KNF and the owner of Getin Bank. The second is the detention of former members of the KNF management. It was November 13th and December 6th respectively. These events had the same resonance for the banking sector. When analysing the changes in the WIG – Banks exchange rate in that period, we notice the following reaction of the stock market with some time delay. This applies to the WIG – Banks quotation on 16 November. On that day, one of the three lowest closing prices in a year (7161.54) was recorded, while on that day the lowest price in a year (7040.86). There can be no doubt that the reason for such a significant decrease was the media information about a conversation between the then President of KNF and the owner of Getin Bank. However, the banking sector itself defended itself with results in the following days, which resulted in an increase in the exchange rate, which was not weakened by reports of the arrest of the President of KNF by law enforcement authorities (this took place on 27 November). In this period, a mini upward trend in the exchange rate is noticeable. However, further information on the arrest of former members of the PFSA management on 06 December resulted in a significant drop in quotations – to the level of 7244.17 (on 11 December).

The question should be asked how the bank shares market will develop further? How much more turbulence is it able to withstand without causing negative reactions from stock market investors? Analysts often use the term investor moods – but what really makes up these so-called moods? Certainly, they are positively influenced by economic results, and also undoubtedly by investment safety. But investors are people who, regardless of measurable indicators, are also guided by emotions. The stock exchange is not free of emotions – we have seen it more than once. Also, the recent events related to the PFSA had a direct impact on the banking sector listed on the WSE. These events described by the media evoked certain sentiment and emotions among the recipients, and this could undoubtedly influence their behavior, causing for example the desire to get rid of their values. 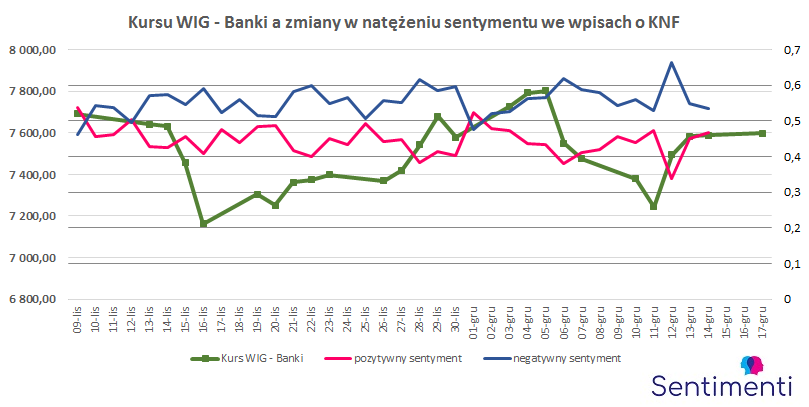 Analysing the above chart one can notice a certain correlation between the changes in the intensity of sentiment in the texts about KNF and the behaviour of investors manifested in the WIG – Banks exchange rate fluctuations. Thus, in a situation when the positive (increase) and negative (decrease) sentiment curves were aiming to cross, it was a certain signal to increase the bank share price. It took place on 16 November and from that day onwards the price rose until 29 November. On that day the sentimentary curves spread out and a short-term price drop was recorded. After that day, the curves entered the convergence phase again and the price went up (until 05 December). On the next day (after information about the arrest of former heads of the Polish Financial Supervision Authority), the exchange rate fell. The sentimentary curves entered a phase of retreat and the exchange rate adopted a downward trend until 11 December. After that day, the sentimentary curves came close, and the exchange rate entered the upward phase again. However, since December 13th, the positive sentiment trend has seen a decrease (and at the same time an increase in negative sentiment), and this may suggest that in the following days there may be another downward correction of bank share prices.

In this analysis, only one element has been adopted which may affect the share price levels of banks listed on the WSE. This element is media information about the situation in the PFSA. However, it already gives some premises to start observing carefully and trying to study the emotions connected with the capital market. A more complete picture can be obtained by conducting broader research, especially of the basic emotions that function in the environment of investment processes taking place on the stock exchange.

It is still necessary to consider how individual emotions have changed responding to subsequent reports of irregularities in the PFSA and whether they also have predictive power. The graph with the results of the averaged daily emotions indicates, first an increase in the proportion of disgust and anger and a decrease in joy. Strong fluctuations of trust can also be observed. SentiTool as a tool to help predict stock market trends? It seems that this is quite a possible scenario. 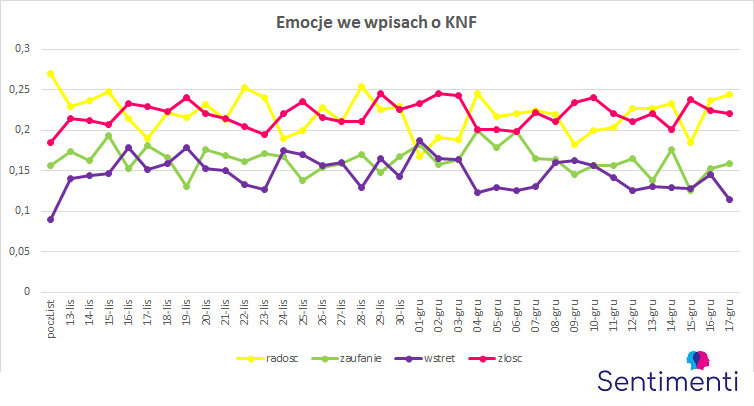 « Negative emotions towards politicians. 8 basic emotions – why so much? »