How to properly analyze emotions?

Each data analysis is aimed at understanding what information it contains. Has something changed, or is there a difference between A and B? Do changes in A correlate with those in C or D? Only these steps allow us to draw conclusions about the results.

First stage: measurement. What is the text?

The above statement also applies to the analysis of emotions or sentiment. Its first stage is the MEASUREMENT, checking how many and what kind of emotions we find in a given text or set of them. The result of a simple emotion measurement shows the intensity of each of Plutchik’s 8 basic emotions supplemented by positive and negative sentiment and arousal (overall emotional temperature of the text). Sometimes we can afford to interpret it already at this stage. We did it in one of our first entries, where we analyzed short ads (what is important, we have already managed to improve the way the results are presented). By analyzing the ads we wanted to show something characteristic for the whole type of texts: the most important emotions are joy and trust, only at the very beginning of the story about the product the creators allow themselves to remember the negative ones – to show the hardships of life before the era of the best shampoo or grease in the world.

The correct results of the Emotional Measurement are those that are consistent with people’s feelings, after all, each of us is an expert on feelings. Our tool owes its correctness to the participants of research on emotions in Polish, which we conducted according to the best scientific standards. 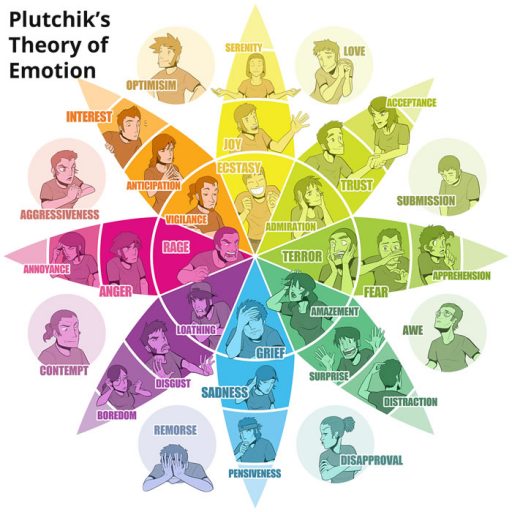 Measurement is only the first step towards understanding the message and the emotions it contains. When we deal with many similar texts or collections of texts, we have to do something else. We want to find out which shop has the best opinions? Which version of our marketing content expresses the most enthusiasm or best shows interest in the subject? Which of the texts in the “Beauty” section will delight, move or warn the reader? We are talking about COMPARISON.

The second stage: comparison. Does this text differ from the average?

Comparison is perhaps the most important stage in the analysis of emotions – thanks to it we not only find out what the text is like, but also how it compares with others. We can compare directly – as we did when writing about lipsticks and lipsticks. Then we were interested in which of the topics has an advantage in terms of positive emotions and whether this difference is statistically significant. However, comparing several or a dozen or so different cosmetic brands cannot be done in this way, it would not be the correct approach. That is why in the text about beauty companies we used a comparison to the average – we needed some kind of background measurement, so-called baseline. This approach will be useful, for example, when comparing shops and brands. We then answer the question which brand has better or worse results than most of the industry.

The most general type of baseline would be the sum of emotions that characterize not only the domain, portal or texts of a given author, but simply language. In linguistics, the so-called Polyanna effect is known, which is that there are more positive than negative expressions in every language. Not only in the dictionary, but also in what we say – this effect expresses quite a general tendency of our minds to spend time and energy rather on pleasant things. In our research we very often see this tendency – joys and trust are emotions that appear in the greatest intensity not only in advertising. The fact that language has its emotional mean all the more reason to draw conclusions only based on comparison and not on the measurement itself.

Third stage: trends. What do emotions do?

The analysis of emotions is also about tracking changes in time, i.e. monitoring emotions. We can check whether sadness or revulsion show a growing trend, i.e. there are more and more of them in statements on a given topic or in the opinions of customers. If we notice a trend, which is statistically significant, we can predict what will happen in the future and if by chance it does not mean an impending crisis (depending on the slope of the trend line).

At this stage it is also possible to go beyond the data from the Sentimenti tools. We started with something simple, accessible and yet untouched by others – we compared the emotional temperatures of mentions of listed companies with the prices of their shares, published publicly. Sentistock is great, it allows you to determine what the investor mood really is and how it translates into stock market fluctuations.

This part of the analysis of emotions depends entirely on who and for what purpose wanted to examine the overtones of the text, the notes, the conversation. We have also managed to show which emotions correlate positively with reactions on Facebook and Twitter – that is, how to write, so that the observers would like to like or comment on the post. However, we might as well ask how emotions correlate with remembering information from the text. Studies on the psychology of emotions, including those conducted by our colleagues from LOBI, indicate that the overtones of the text have an impact on what and how well we remember. Correlation between customer feedback and online store sales? Our tools are designed for this type of research.

Why so many stages?

Emotions were not created for themselves. This is our advisory mechanism: they tell us what action to take. Tversky and Kahneman did not receive the Nobel Prize for their research, but for showing that the consumer, including the stock market, is not rational. This statement tells us two things:

Trying to understand the emotions “on the eye” we won’t know more than the average customer wanting to buy a new computer, reading all the available reviews and then deciding on the brand for which he or she has (and had) the warmest feelings. Maintaining scientific standards, checking whether differences and trends are statistically significant and even better correlate with other, harder indicators is the best way to find out. After all, we live in the era of big data and data analysis.

« What emotions make the social entry popular? Which words are positive and which are negative? Sentimenti talks about his research »