Is popularity a matter of emotion? Example of the series “Captive”

Is popularity a matter of emotion? Everything points to it. We can measure the power of a message primarily by what emotions it evokes. Captive has made an impression on Polish viewers comparable to the adoration for Isaura’s Slave. We checked how the emotions expressed by them online changed during subsequent seasons and episodes.

“A costume series that was presented at the Cannes Film Festival” – this is how TVP begins the description of Zniewolona on its VOD site. The Russian-language Ukrainian production turned out to be a huge hit. During the broadcast of the first season, it was written about 348 times a day on average, the second season was commented on three times more often (about 962 mentions a day in August 2019). Super, beautiful, good, interesting – these are the adjectives appearing most often in mentions of the first season of the series. On the occasion of the second one, great joins them.

The series was launched on Polish television on July 1. At first, not much was written about it, and the opinions of those who spoke out were often negative. The change was noticed only after a week or so, or after the first weekend, when one could relax longer in front of the screen – the number of statements published online gradually increased, and their overtone was favorable. 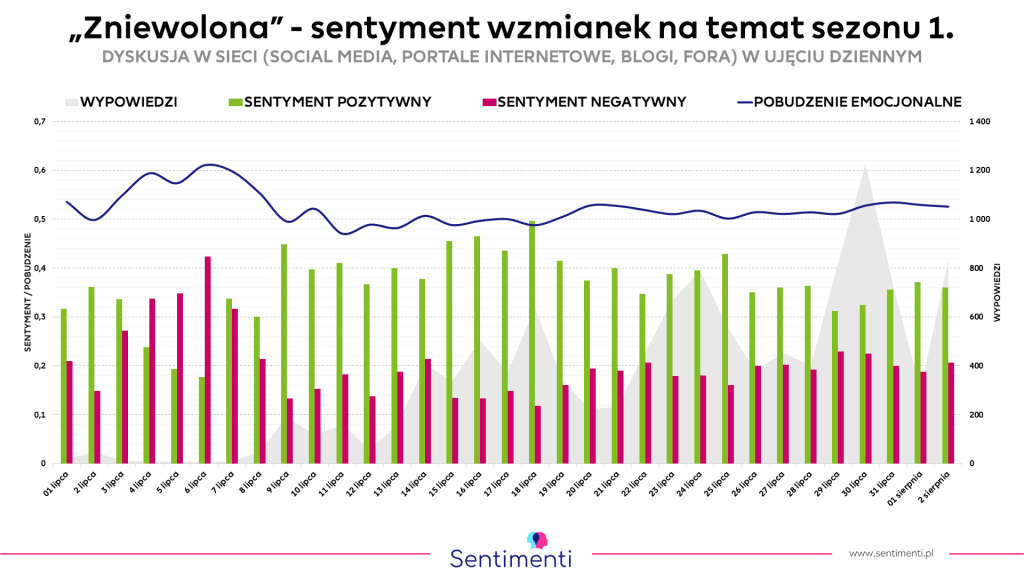 If we take a closer look at the emotions expressed by Polish internet users about the first season of Captive, we will see that they did not change much after the first week, when the series was just gaining popularity. The intensity of joy and trust is at its highest around July 18, while surprise is the strongest emotion after July 26, with anger and sadness also rising slightly. 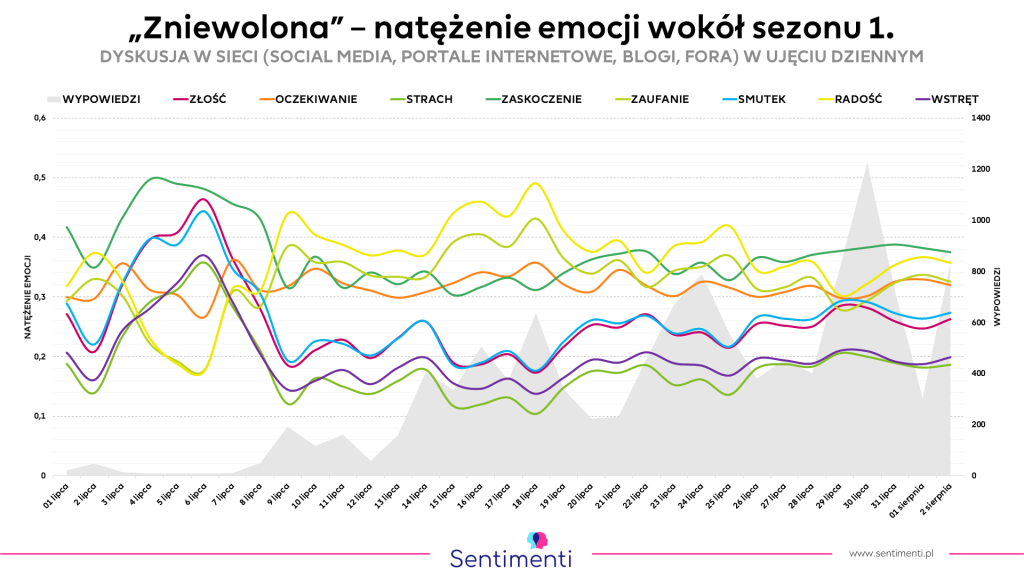 The second season of Captive premiered on August 3, and the opinion of the general public about it was clear: as indicated by the words wonderful, beautiful, good, positive sentiment prevailed. Only after August 23 can we see an upward trend in the intensity of negative sentiment.

In contrast, agitation, very generally understood as the energy of mentions, did not fluctuate at all. The results of the sentiment analysis of mentions published during the viewing of the second season actually do not differ from those obtained after July 8. It was then that the tone of mentions of Captive was established. 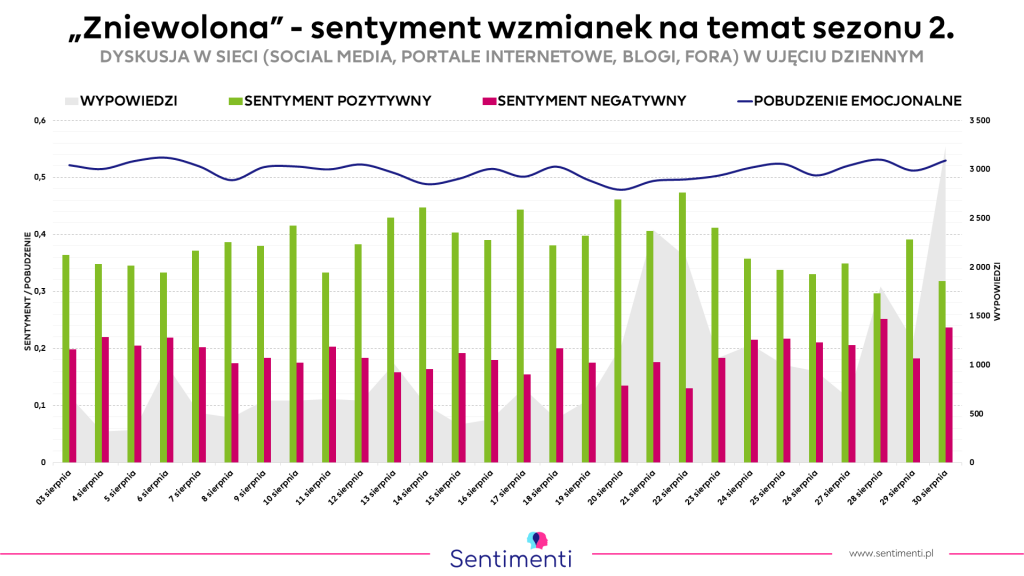 We also see very similar results in the analysis of emotions. The feelings expressed by internet users do not change significantly until August 24, when we again notice a spike in surprise, anger and sadness and a drop in joy. 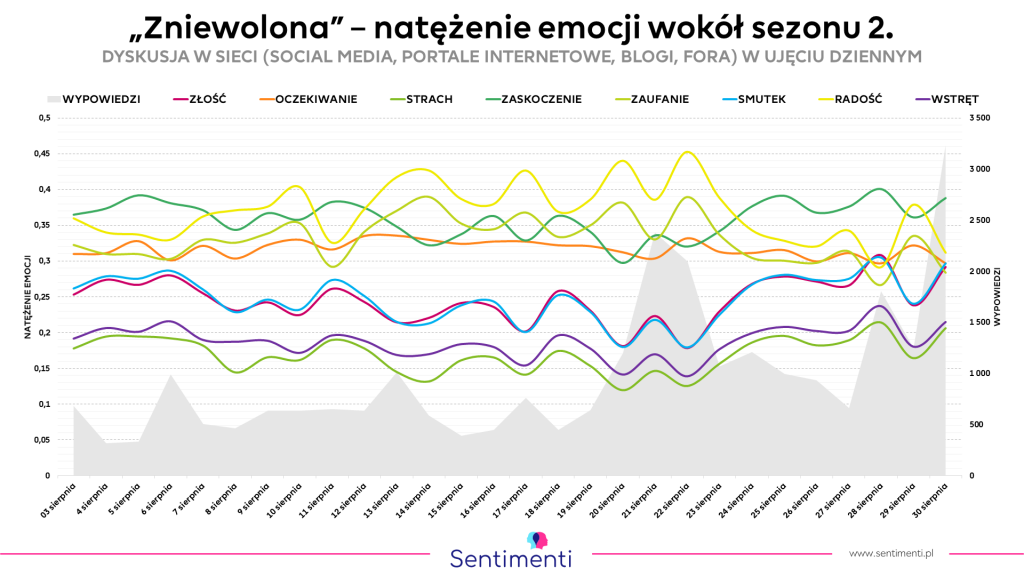 Keep the viewer satisfied but in suspense

Our results can be summed up in one sentence: the reactions of Internet users reflect the storytelling of the writers of Captive. The closer we get to the season finale, the greater the tension. The viewers become irritated with the characters, surprised by the turn of events, saddened by the fate of their favorites. The sudden twists of plot (received with surprise) may diminish the satisfaction of the series’ fans, but they will undoubtedly make them switch on the TV set or VOD as soon as the next episode comes out.

When writing about a series, film or other work of culture, internet users not only express their opinions, but also refer to the content of the watched productions. We mentioned this when we analyzed Chernobyl and Kleru. In the mentions of Captive, this means that, for example, the anger expressed by viewers can refer both to the characters of a beloved production and to the opinion that the series has broken down. In this case, however, comparing the changes in emotion as the available episodes arrive allows us to hazard a guess that we are dealing with changes tightly controlled by the creators through twists and turns strategically placed in successive episodes.

How do we know if our message is working and translating into popularity?

Serial, film and advertising all have something in common – they are meant to evoke an emotion and then a reaction. While the creators may be about different feelings, the reaction very often comes down to purchase. In case of a horror movie it’s about fear, in case of a comedy it’s about joy, and in case of a bank it’s about trust. We can measure it by monitoring subsequent stages of the purchase funnel… But how do we know what caused the lack of conversion between watching the ad and the “buy” button? Did the message break down, or did poorly implemented links not work?

We can measure the strength of a message primarily by what emotions it evokes and whether it translates into popularity. If no one is writing about our product, we know it won’t be easy to buy. And when we finally see a growing number of mentions, it’s time to ask what emotions they express. Is our horror movie funny or scary? And the series – is it gripping, or are viewers rather satisfied, but nothing motivates them to continue watching?

Emotion analysis is also useful when we have hard results at hand. In the case of Captive, they speak of growing viewership. Looking at emotions allows us to understand what makes the sales or the number of views change. Above all, it gives us an answer to the question of whether it is whisper marketing or perhaps the expert work of our scriptwriters.

« Sanah and the “Drama Queen”. Song lyrics as a conglomeration of feelings and emotions Cyberpunk 2077: Could CD Projekt’s share price drop have been predicted? »