Sentiment or emotions on the crypto stock market?

Are emotions more effective on the stock market than the sentiment is? How effective are they? We have long been studying the importance of emotions in economic analysis. How they affect the prices of various financial instruments and values quoted there. We are not the only ones – for some time now, with increasing access to published opinions, whether on portals or in social media, there are publications and researches where authors try to find correlations between investors’ mood and stock, currency, crypto rates, etc.

December 2018 revealed the publication of “Media Sentiment and International Asset Prices”, issued by the National Bureau of Economic Research. In the aforementioned read, its authors have analyzed in Reuters’ and Bloomberg articles on their impact on major stock indices. Researchers discovered interesting relationships between sentiment and index values, amongst the others:

A similar topic was researched by Yigitcan Karabulut, Goethe University Frankfurt’s Assistant Professor. He analyzed predictions on a Facebook database.

None of the approaches, unfortunately, allowed the results’ accuracy of forecasts to be higher than 55-60%. This will not be possible whilst basing on sentiment or emotional tags offered by social networking platforms like Twitter or Facebook only. In Sentimenti, we have many more possibilities – up to 11 emotional variables. Do you want more information? Look below.

Sentimenti and the Warsaw Stock Exchange

In Sentimenti we took on another milestone in financial behavioral analysis. We use deep neural networks to analyze any published text based on 8 emotions and the overall arousal. Thanks to the idea we can read investor’s moods and predict their future actions more precisely. We have already proved it by checking our tools’ effectiveness on publications related to the Warsaw Stock Exchange. As many as 87.1% of the cases with shown changes in the emotion intensity area in texts about a certain company allowed us to predict the price changes.

For everyone who has even a little interest in the market, the cryptocurrencies are known for their strong emotional connection. Values such as Bitcoin, Ethereum (or others!) don’t have a real use so far but are mainly treated as purely speculative assets. And where speculation is concerned, there also are emotions.

That is why we have set ourselves the goal of checking how strong the correlation between cryptocurrencies and emotions is. And, by the way, does the same scheme work with the positive and negative sentiment only?

We have then implemented our artificial intelligence to help. Our IT-team inserted all the data collected for analysis and set it the task for finding correlations between these several dozen variables, both on the side of stock market prices and emotions.

We have tested the 2018 datasets on a total of several hundred different training models. Then we started forecasting the best of them for 2019. We changed the approach several times, looking at the effectiveness each time. A few examples of this analysis ale pictured below:

The number of days analysed before the forecast day:

We checked which number of days back best affects the quality of the predictions. We examined periods from one to fourteen days. It turns out that the best results are obtained when we analyse the last three days (77.84% effectiveness of the prediction).

Removing one of the emotions 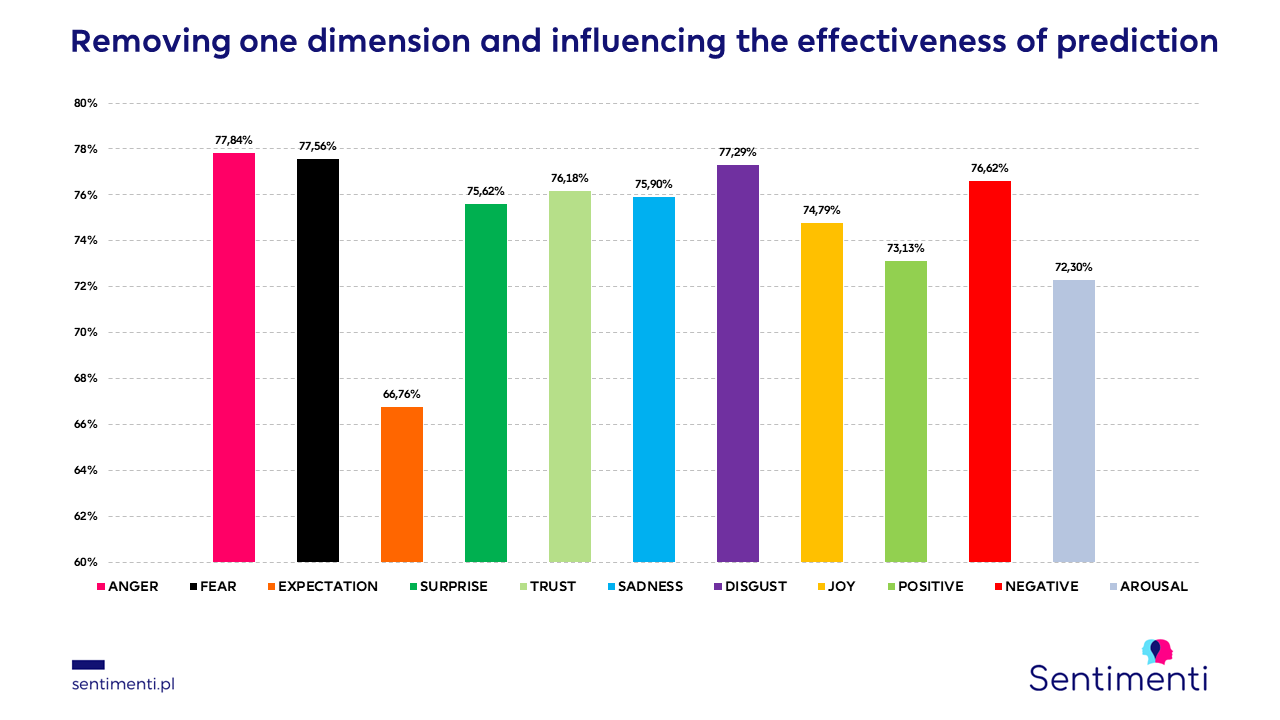 The number and choice of indicators considered are important. This can be seen in the graph shown above. Each of the variables influences the quality of prediction, it is enough to turn off e.g. emotion expectation for the quality to drop drastically. In other tests, we checked the effectiveness of prediction only on sentiment. Unfortunately, the results were far from the expected ones.

Quality of prediction vs. the time of the start of the 24-hour cycle 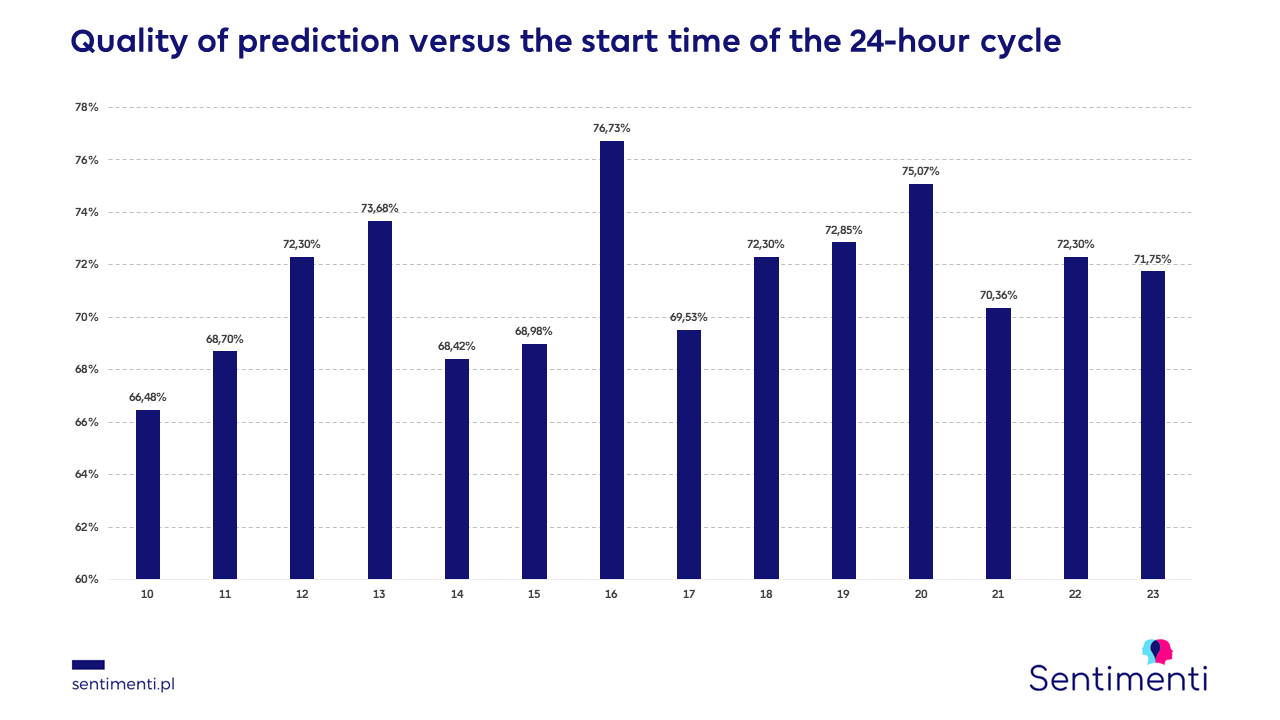 It turns out that the time when the forecasting starts is also important. In the time lapse between 10:00 and 23:00 the best results were achieved at 16:00 (76.73% effectiveness). This is the reason we take the hour to our daily forecasts.

Emotions on the crypto stock market: the final proof

After these and dozens of other tests, this is how the results of the best possible set of variables for 2019 (learned on the 2018 model) are presented: 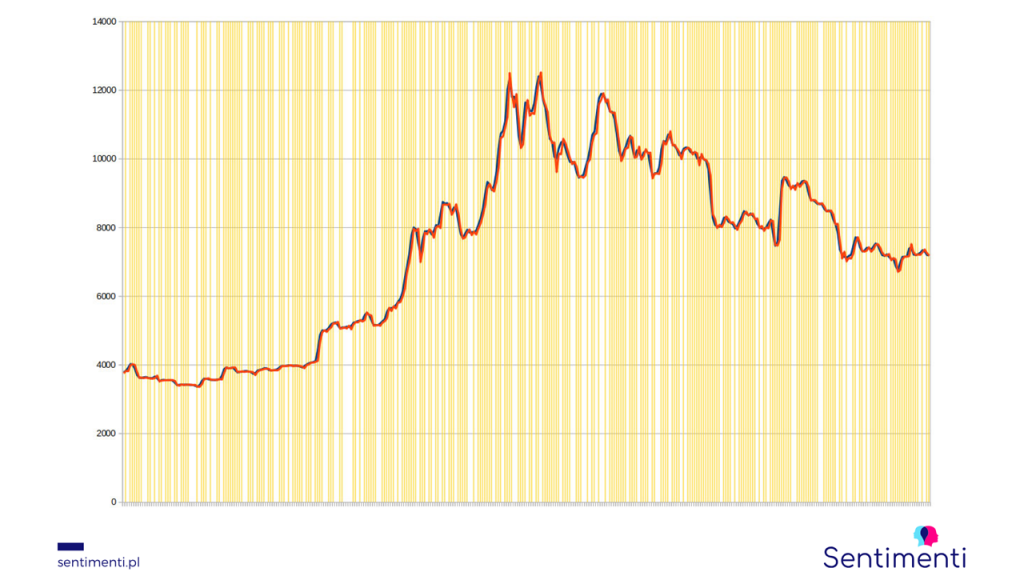 The X-axis is a period of 365 days. The Y-axis is the Bitcoin value in USD. Blue line is the real price, the red one is the forecast price. The yellow areas are the trend hits.

The prediction effectiveness, which is based on indicating the trend of price change, was 78.95%. As far as we know, such high effectiveness was not achieved in any of the previous studies researching emotions on the stock market. We are happy to see relatively small deviations between the actual and forecasted exchange rate (reaching a few percent at most). This is a good forecast for the already started tests of forecasting the numerical value of the course.

Take advantage of this knowledge and get access to information supporting your transactions. Measure emotions in the stock market and benefit from the results. We look forward to hearing from you!

« The foreign languages in Sentimenti Emotions on the stock exchange: what investors can learn from it? »