We talk about insurance, or how insurers are doing in catastrophic weather?

Progressive climate change is already visible with the naked eye. In Poland, weather anomalies such as droughts, tornadoes or cloudbursts appear more and more frequently. Especially the latter have become a scourge of the last several weeks: as a result of excessive rainfall many regions of Poland, especially in the south, have been flooded. When in 1997. When the then prime minister Włodzimierz Cimoszewicz, when asked about compensation for flood victims, stated that it was necessary to insure oneself, this (seemingly) obvious issue almost cost him his position, and as a result of the unfortunate statement, his party lost the upcoming elections. How is it today? We checked what Internet users say about insurers in the context of the flood.

Circumstantial opinions about the industry

The insurance industry for a long time aroused mixed feelings among Poles. As a part of the financial industry it enjoyed low social trust for several reasons: this result was sustained by reluctant payments of claims, their amount, the way of calculating premiums, long-lasting and incomprehensible claim validation procedures, etc.

Only the change of the above determinants combined with the increase of social awareness and understanding of the impact of the insurance industry on social and economic security of Poland resulted in gradual but regular increase of confidence in the insurance sector.

Today, the offer of insurers covers a very wide area and Poles themselves insure much more willingly. Although not as willingly as people in Western Europe (in Poland, additional insurance is still seen as a luxury), but the increase in the number of countrymen insuring their life and property is noticeable. In addition, their consumer awareness is also growing, as evidenced by the popularity of various types of insurance comparison sites, ranking machines, etc. and, consequently, changing the insurer to one that offers more favorable terms.

Insurance and floods: a controversial topic

Two catastrophic events, the floods of 1997 and 2010, had an impact on the increased awareness of Poles of the need for flood insurance. This awareness extended not only to the necessity of insuring against the devastating effects of nature, but also to the circumstances surrounding the policies in question: insurance rules, rates and payments due to flood damage.

Poles are now more willing to find out which buildings can be insured and which will be excluded by the insurer, what risk assessment criteria are used in the event of flooding, and to check the properties they buy from this point of view – the low price is no longer an indicator of the attractiveness of a plot of land or of a construction project (e.g. a house, a terraced house etc.), but has become a warning light – buyers check such offers in the flood database with the knowledge that an appraiser from the insurance company will also carry out an analogous procedure.

And there is a lot to fight for: in case of a flood, the insurance may cover not only the losses caused to the property itself, but also to its attached outbuildings and movable equipment: furniture, household appliances, works of art, plants, interior decoration (floors), items used for business activities (e.g. machinery), etc.

Finally, it is worth mentioning that apart from the growing awareness of consumers and effective sales work of insurance agents, there is another aspect – legal regulations. Since 2003, it has been obligatory for farmers with a farm of more than 1 ha to insure themselves against natural disasters. However, according to the insurers’ data, the policy covers mainly residential and farm buildings (90% of farms). In 2020, only 30% of farmers insured their crops and livestock against natural disasters.

The government’s policy plays a major role in this situation – it pays out targeted benefits to help the most affected regions or municipalities, regardless of whether a given household is insured or not. These benefits cover both reconstruction of destroyed houses and temporary support. In part, they make Poles insure themselves only to the mandatory extent.

Insurance. How do internet users discuss them?

We decided to take a look at the emotions that insurance companies and the issue of flood and flood-related repair evoke in the Polish Internet. We checked and researched articles, posts, comments etc. between June and August (15.08) of this year. To begin with, we confronted with each other two simple phrases – “insurance” and “compensation”. This allowed us to get a general idea of the mood of Internet users and the context of mentions (e.g. on forums or web portals) concerning the insurance industry. 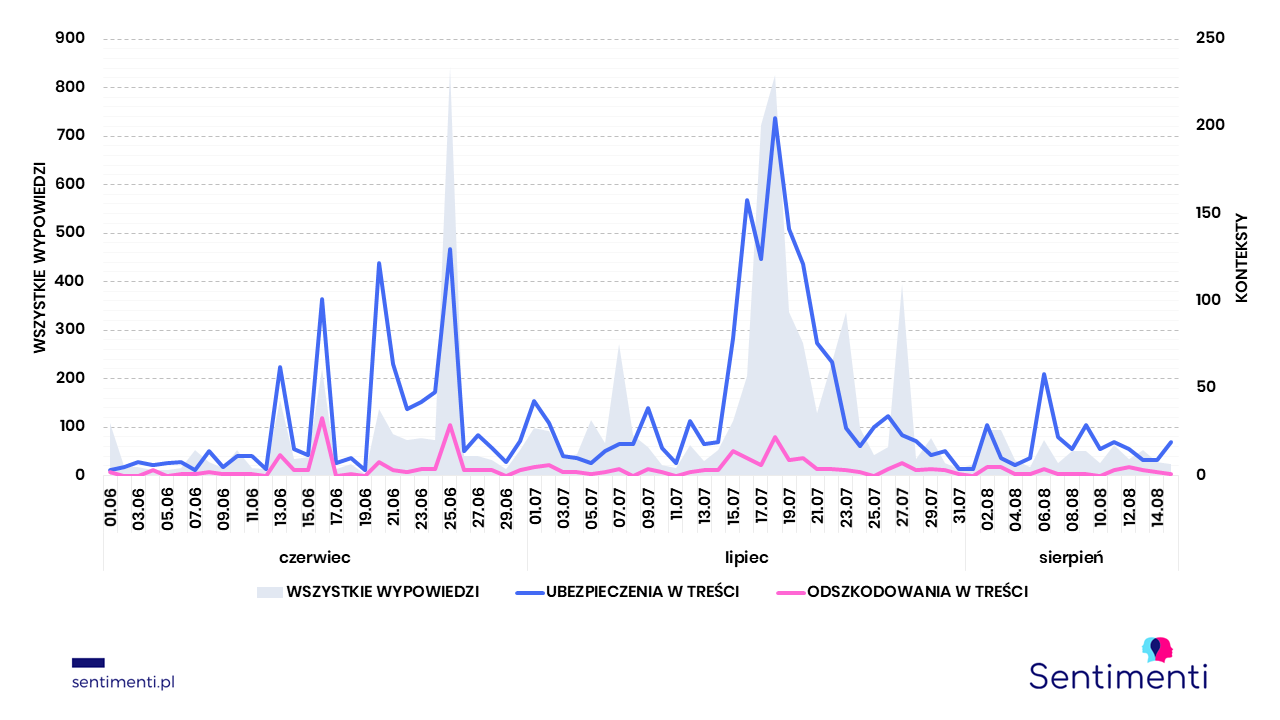 Let’s take a look at the chart: it shows the intensification of insurance discussions in the period 12-26 June and 14-24 July this year, with much less intensity in the phrase “compensation”. The basis of these discussions was, among other things, the catastrophic weather situation in Europe and partly in Poland: a tornado with winds blowing at a speed of over 300 km/h (!) passed over the Czech Moravia, there were also hailstorms, including in Poland – in Tomaszów Mazowiecki the diameter of hailstones amounted to as much as 13.5 cm.

Similar hailstorms occurred in Italy and Switzerland. In addition, thunderstorms and storms caused devastating floods in Belgium, the Netherlands and – above all – in Germany. Slightly weaker, but also powerful rainfall and windstorms were recorded at that time in the country, including Kujawy, central Poland (Lodz), Lesser Poland (Małopolska), Silesia and Podkarpacie.

For these reasons, dozens of articles, analyses, news and reports appeared on the Internet, but also heated discussions under the articles, on forums and in social media: there were requests for help to victims of flooding, criticism of sly car traders hunting for the so-called. There were also intensive criticisms of the government’s assistance to the victims in the context that the victims should have insured themselves earlier, and not now beg for help from the state budget (i.e. “FROM OUR TAXES”). Part of this context were comments on crop losses suffered by farmers.

Part of the discussion also referred to the state of flood protection in the country, with commentators criticizing the government’s ad hoc actions, ineptitude and lack of long-term plans. Finally, the media in general used the opportunity to recall the tragic floods of the past years, which effectively heated the atmosphere of public opinion and the temperature of various discussions.

The temperature of water, or discussants in emotion

Our next activity was to determine the average of the most important emotions of the discussion, and then to show the dynamics of change of these emotions during the period studied. Let’s look at the graph – it perfectly shows the whole situation: 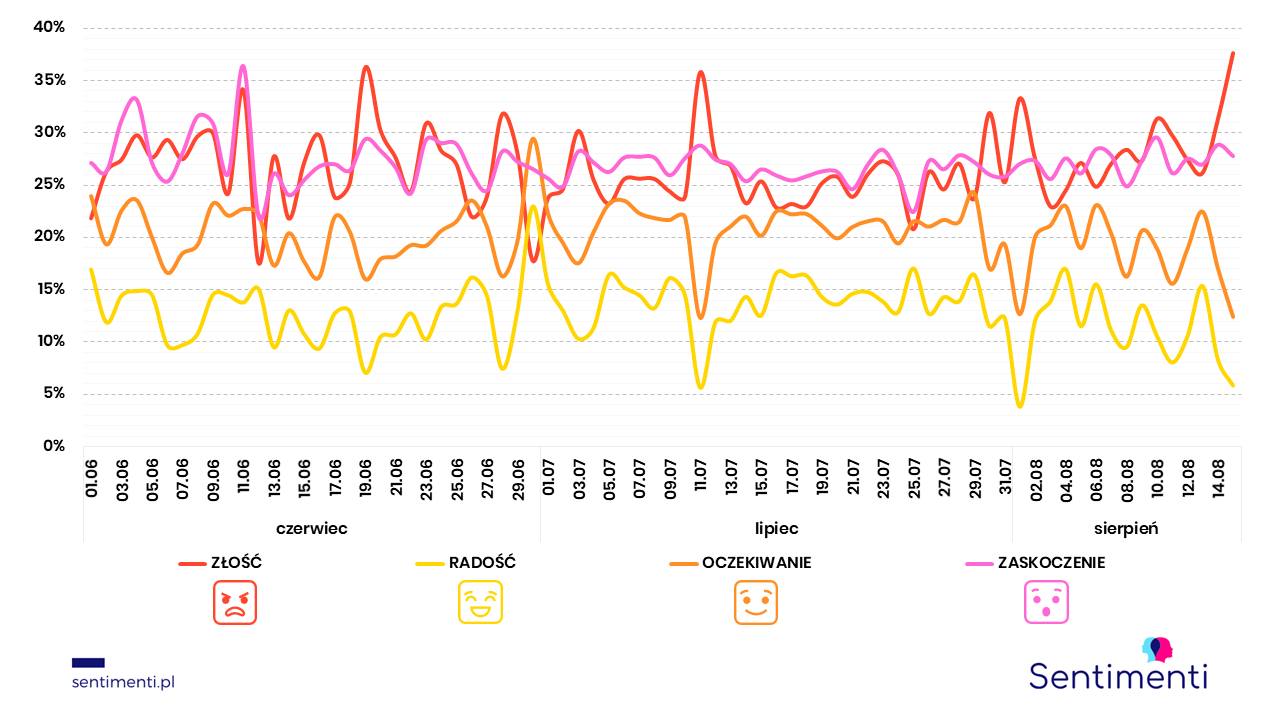 The results obtained in the study were basically to be expected. In the graph we see a high level of anger and a similar level of surprise; there is even some overlap in the dynamics of the two emotions. The peaks indicate the intensity of discussion during the period of natural disasters. The level of joy is of course also unsurprising, while it is interesting to note that the joy and expectation graphs coincide in terms of dynamics. This is most likely caused by the reaction to the actions taken by the authorities and, at the same time, hope for a change in the situation.

Insurance. Do internet users have sentiment for the companies?

Nowadays, a popular solution in the market for content analysis using artificial intelligence is the analysis of texts for the sentiment contained in the utterances. Sentiment analysis is also a part of our offer, however, it is only one of the elements of cross-sectional content analysis: without taking into account emotions and the level of emotional arousal, sentiment analysis gives incomplete results, which can also be misinterpreted – two so-called negative emotions (e.g. sadness and anger) will cause the sentiment of an utterance to be determined as negative. Meanwhile, these emotions are significantly different from each other – their impact on the person feeling them will cause different types of behavior (anger – attack, sadness – freeze or flee).

As stated above, as part of the analysis, we also conduct a sentiment study of the text under review. For the purposes of this article, we conducted such a study on a sample of 7901 mentions. Here, too, there were no surprises – insurance companies are not given sentiment by internet users, although we should have said otherwise – the dynamics of mentions indicates the significant presence of negative sentiment. Let’s take a look at the chart: 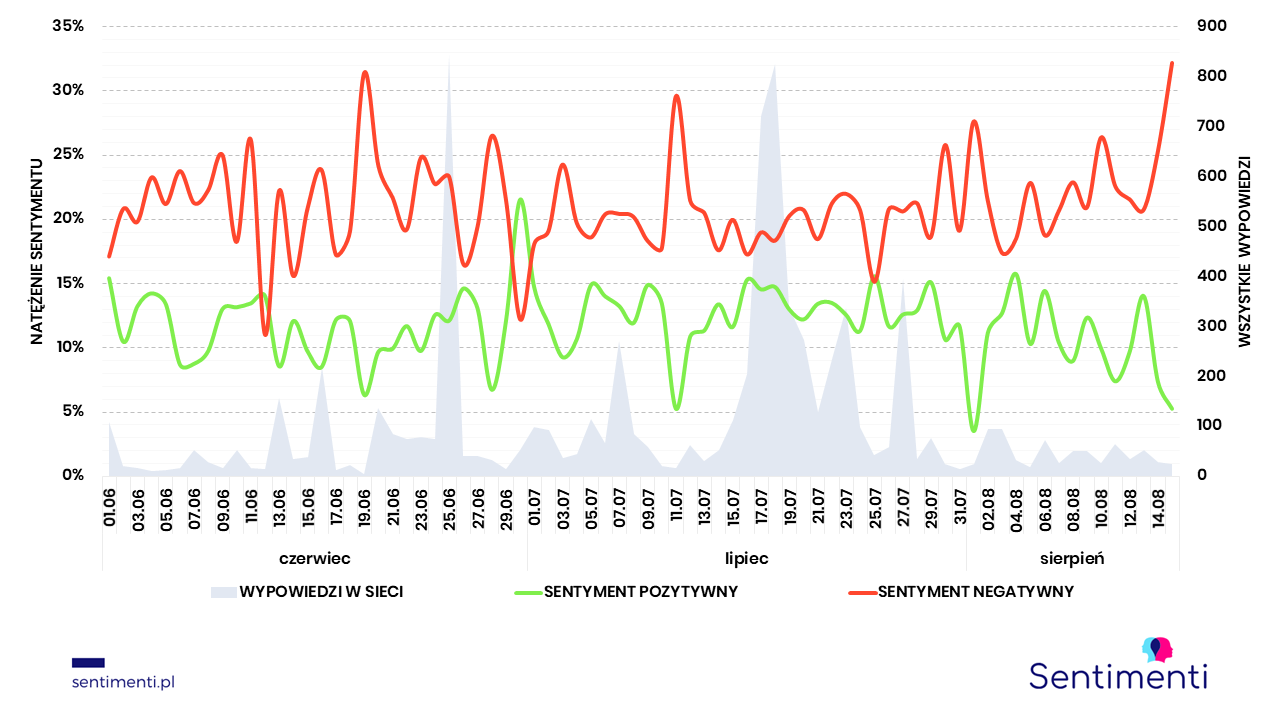 Figure 3: Sentiment dynamics in mentions of insurance during the study period.

What we see is an intense discord between the number of negative and positive mentions: the dominant sentiment towards the topic is minor, and the dynamics of the negative sentiment is basically inversely proportional to the positive sentiment; the moment when this dynamics is particularly well visible is between 25.06 and 7.07.

Significantly (and this trend is repeated across survey stages and is confirmed in the mentions we collected), much of the negative sentiment about flood insurance is driven by commenters’ anger directed at the uninsured who are demanding that the authorities compensate them for their material losses. Mentions also indicate the frustration, anger and disgust of Internet users with the authorities in general – not only for paying targeted benefits to the victims, but also for systemic negligence in water management and flood control policy.

A word of summary

The above analysis of publications and discussions found on the Internet showed us that the topic of insurance in general, and in the context of natural disasters in particular, is still controversial and stirs up a lot of emotions among Poles. First of all, because the progressing climate change causes more and more frequent occurrence of such weather anomalies as tornadoes or flash floods, which are widely commented on in social media, forums, articles and news.

Insurance companies are still not very trusted, although the trend of them building a positive image is growing. They are hindered by … their fellow countrymen, who insure themselves to a minimum extent and usually when required by law. On top of that, according to internauts, there are high premium prices and often difficult loss adjustment procedures. The icing on the cake is the belief that flooding or similar damage caused by a natural disaster will not happen to “us”.

Finally, the government and local governments are not helping insurers to change the current situation. This context is evident from the huge number of mentions – it is emotionally charged and generates a lot of negative emotions – mainly anger, but also fear and surprise. It is little consolation that people who have already experienced a loss of property take care of proper insurance.

« Why is it better to examine the 8 emotions in a text instead of just analyzing the sentiment? Emotional ad positioning and emotional ads »